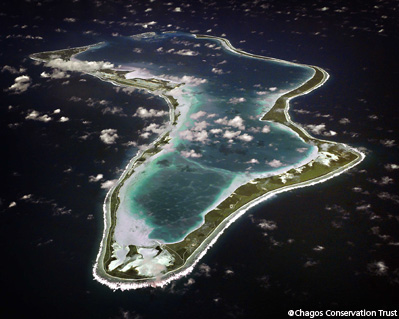 British Indian Ocean Territory (BIOT) is one of the UK's most remote Overseas Territories located in the middle of the Indian Ocean. It comprises the 55 tropical islands of the Chagos Archipelago across 5 atolls and set within 544,000 km² of pristine ocean. The Chagos Islands occupy a land area of approximately 55 km² and the whole Territory was declared a Marine Protected Area (MPA) by the British Government in 2010. At 16 km² Diego Garcia is by far the largest land mass and the only inhabited island.

The biodiversity of the Chagos Archipelago is very rich, particularly in the marine environment which contains some of the world's healthiest coral reefs, the world's largest coral atoll (the Great Chagos Bank) and an exceptional diversity of deep water habitats. On land BIOT is recognised as globally important due to the large numbers of congregating and nesting seabirds.Over 33 seabird species have been recorded with 17 species regularly breeding. Ten Important Bird Areas have been designated. 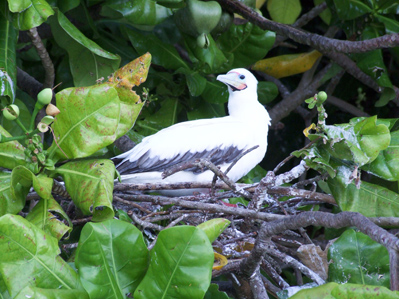 Large populations of coconut crabs (Birgus latro) thrive on most of the islands. With a leg span that can reach over 1m and an adult weight up to 3.5-4 kg coconut crabs are the world's largest land arthropod. The many sandy beaches provide perfect nesting sites for hawksbill (Eretmochelys imbricata) and green turtles (Chelonia mydas).

A relatively young archipelago, the Chagos Islands have been colonised by plants since there was sufficient soil to support them - probably less than 4,000 years. Seeds and spores arrived by wind, sea or attached to passing sea birds to colonise the emerging islands. This original native flora is considered to comprise 41 species of flowering plants and four species of fern, plus a wide variety of mosses, liverworts, fungi and cyanobacteria. No endemic species of plant has been recognised. Today the status of the native flora depends very much on past exploitation of particular islands. 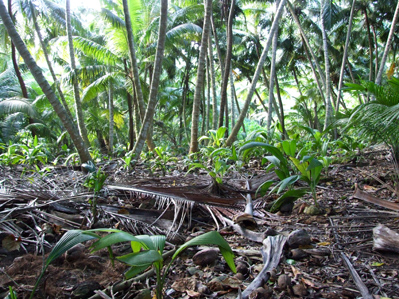 About 280 species of flowering plants and ferns have now been recorded but the increase reflects non-native plants introduced to Chagos either accidentally or deliberately by human's activities. On many islands native forests were felled to plant coconut palms (Cocos nucifera) to extract copra oil. In the mid-1800s so much copra oil was being produced for export that Chagos became known as the 'Oil Islands'.

Much of our knowledge of plant distribution across the Chagos Archipelago is based on the excellent work done by John Topp in the mid 1980s and between 1993 and 2002 when he was the BIOT Conservation Consultant. He undertook botanical surveys on most of the islands and compiled an invaluable island by island species checklist containing 276 taxa. John's checklist contains 232 non-native taxa, 128 of which had only been recorded from Diego Garcia. These represent plant species introduced to Chagos, many of them through Diego Garcia in relatively recent times. Some of these non-natives have become invasive and pose a real threat to native communities and plans are being developed to control them. However, even this situation is not clear cut. Determining what is native and what is non-native is challenging, more so when we do not have a long data record - apart from a few collections from the Transit of Venus Expedition in 1882, most Chagos specimens in the Kew Herbarium are from the 1960s-1980s.

The 2010 Chagos Expedition offered an opportunity to undertake an updated assessment of the status of the flora. The expedition visited all 5 atolls and landings were made on 39 islands. The current status of the flora and state of habitats continues to reflect past exploitation. Islands that had been historically converted to coconut plantation have in the absence of any management turned into 'coconut chaos'! Mature coconut palms can produce 70-80 ripe nuts a year. These drop from the trees and germinate in situ producing a dense and impenetrable understory of coconut saplings to 2-3m allowing little space for any other plants to survive. However, some remnant stands of native trees do occur. These may have been left originally for shade or reflect areas not completely cleared because conditions were not suitable for coconuts. Other native species survive along the coast where they provide important roosting sites for many seabirds. Typical native tree species include Barringtonia asiatica, Pisonia grandis, Calophyllum inophyllum, Hernandia sonora, Guettarda speciosa, Intsia bijuga and Cordia subcordata.

The exciting botanical find of the expedition was an extensive mangrove ecosystem on Moresby Island. Until this point the only mangrove area known in the Chagos Archipelago was the one on Eagle Island which was reported to be in decline. Our visit to Eagle confirmed this and serious restoration activity is urgently needed to prevent the loss of this valuable habitat. It is drying out and being swamped by a combination of over-topping vines, most seriously the parasitic Cassytha filiformis and Ipomoea macrantha, as well as being squeezed out by encroaching Cocos nucifera and Hibiscus tiliaceus. In contrast the Moresby mangrove ecosystem is pristine. It comprises two species of mangrove - Lumnitzera racemosa and Pemphis acidula. The open water supports many dragonflies and several new records were identified. 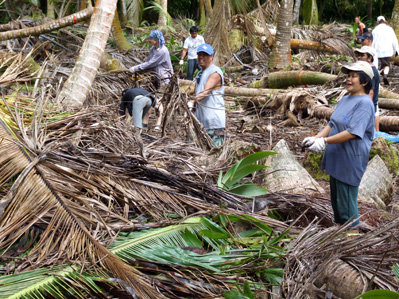 Restoration work has already started on several islands. On Diego Garcia, the Barton Point Atoll Restoration Project is an ambitious pilot scheme to remove coconuts and replant native hardwood trees. This area is designated a Strict Nature Reserve and is an Important Bird Area where more than 16,000 breeding pairs of red-footed booby (Sula sula) have been recorded. People from the military and civilian community on Diego Garcia volunteer on local 'Brit-Op' days to remove coconut saplings, nuts and leaves to clear sites where large coconut palms have already been cut down by trained chain saw operators. All surviving native trees are left and supplemented by others specifically grown for this restoration work. 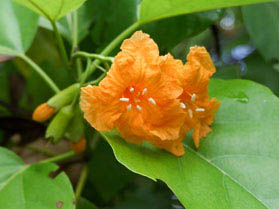 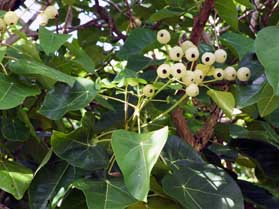 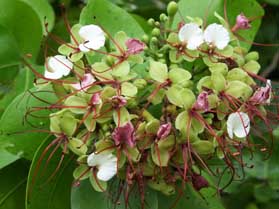 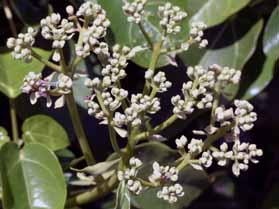 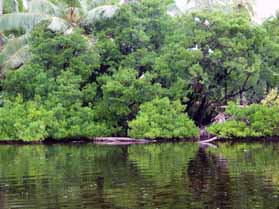 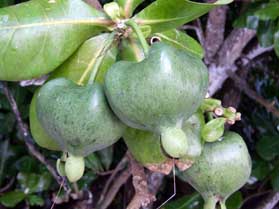