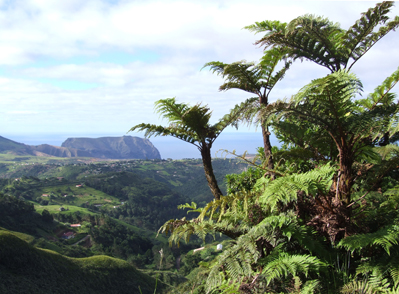 Volcanic in origin, St. Helena is a tropical island situated on the mid-Atlantic Ridge in the South Atlantic Ocean. The Island is approximately 121 sq. km. in area and is composed of soft basalt rocks and consolidated pyroclastic residues, which have been heavily-eroded, leaving a land surface dominated by steep gullies and harder igneous extrusions, which form prominent ridges and rock pillars such as 'Lot' and 'Lot's Wife.' Erosion by wave action has cut-away at the coasts leaving the Island encircled by steep cliffs, reaching 200-500 m in height (except where valleys reach the sea). The highest point is Diana's Peak, at 820m it forms part of the Peaks Ridge, a narrow spine mostly above 700m in height.

St. Helena's sub-tropical latitude affords it fairly constant temperatures; the average annual temperature range at sea level is 21-28ºC, this reduces by 1.3 degrees every 100 m rise in elevation. Rainfall is often extremely localised, creating desert-like conditions of the outer part of the island where 175mm of rain falls per year, compared to the Peaks where cloud and mist accumulate bringing 290 days of overcast conditions and 1050mm of rain each year.

There are circa 420 plant species present in the wild on St. Helena, of these, 45 are endemic and 15-20 are native to the island. The rest, (350 spp. or 85% of the total) are introduced species that have become naturalised. At least 8 endemic species are now thought to be extinct and all of the endemic species on the island are scarce and probably critically endangered (although, no official assessment of their status has yet been made). The vegetation of St. Helena is largely determined by the amount of rainfall, which is in turn closely linked to elevation. As a result, the vegetation differs markedly from coast to mountain top. Despite the fact that the original vegetation of the island has been heavily modified since the arrival of humans in 1502, several ecological zones can be recognized on St. Helena: 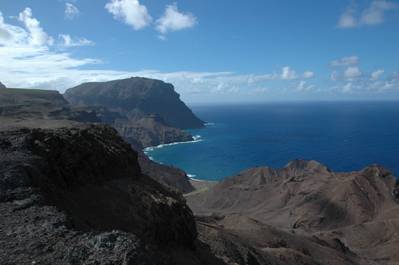 Dry scrub developed on the higher ground where rainfall was sufficient to allow denser plant communities to establish. Originally it would have been dominated by the endemic scrubwood Commidendrum rugosum (Asteraceae - a shrub with daisy-like flowers) and the dwarf St. Helena ebony Trochetiopsis melanoxylon. Scrubwood is now mainly confined to cliffs, and the dwarf ebony has been extinct for 250 years. This zone is now dominated by a community of global invasive species such as Lantana camara (Verbenaceae), wild mango Schinus terebinthifolius (Anacardiaceae), tungy Opuntia cochenilifera and O. vulgaris (Cactaceae) and aloe Furcrea foetida (Agavaceae). 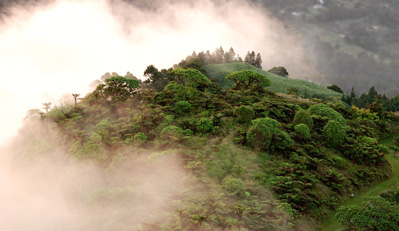 Above the scrub zone, a more luxuriant dry forest would have originally covered large areas of the mid-altitude zone and been heavily dominated by the endemic gumwood Commidendrum robustum, but also including the St. Helena ebony Trochetiopsis ebenus (Sterculiaceae) and bastard gumwood Commidenrum rotundifolium. Very few natural gumwoods remain, only a single mature bastard gumwood, and the ebony was thought to be extinct in the late 1800s until a group of 5 plants were rediscovered in 1980. Despite limited self-compatibility, the ebony has now been successfully reintroduced to a number of sites. However, this zone is now dominated by a mix of wild mango, spoor Pittosporum viridiflorum (Pittosporaceae), black olive Olea europaea ssp. africana (Oleaceae) and Bermudan cedar Juniperus bermudiana (Cupressaceae). 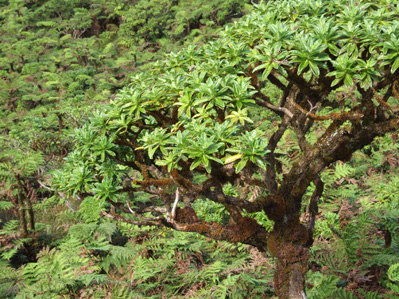 Moist forest, dominated by gumwood (including the false gumwood, C. spurium), had once covered the upper ridges. An understory of ferns, such as black scale fern Diplazium filamentosum (Woodsiaceae) and other upland species such as the St. Helena redwood Trochetiopsis erythroxylon form the understory. This habitat has all but disappeared apart from a single relict stand of gumwoods. Upland forest is now predominantly composed of plantations of pine, blackwood Acacia melanoxylon or Eucalyptus, although naturalized areas of Cape yew Podocarpus elongata and thorn - inkbush (Erythrina caffra- Cestrum laevigatum) woodland are also important.

The 'cloud forest', which would originally have occupied most of the highest ridges on the island, still persists but is restricted to a small area of the central ridge and a relict fragment further west, at High Peak. The community contains a moderately diverse variety of endemic species. These include four species of cabbage trees (all Astereaceae) and formerly, the now extinct stringwood Acalypha rubra (Euphorbiaceae) and St. Helena olive Nesotea eliptica (Rhamnaceae). The most exposed areas are dominated by the endemic St. Helena tree fern Dicksonia arborescens (Dicksoniaceae). A rich understory is also present, composed of herbs such as the lobelia Trimeris scaeivifolia and large bellflower Wahlenbergia linifolia (both Campanulaceae) together with circa 15 species of native and endemic ferns.

Threats to the Flora of St. Helena 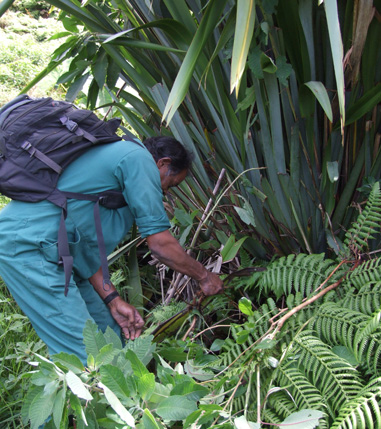 Much of St. Helena's native flora has been devastated by and continues to endure the following problems:

In the early 20th century, the flax industry sustained the island's economy for over 50 years until the market for natural fibre products declined in the 1960s. The flax mills are now abandoned, but large areas of upland hillside are still covered in flax monocultures.

A full survey of both the native and endemic flora of the island was conducted in the past decade by an international team. Data collected include: a simple abundance score for each species across each cell of the 1km Ordinance Survey grid; specific monitoring of 145 1 km transects; specific monitoring of 350 randomly selected 20m plots. 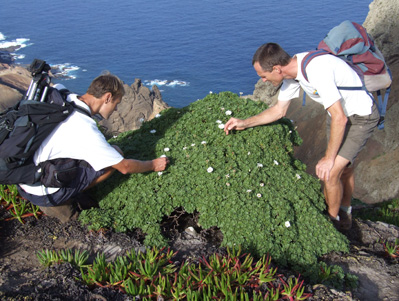 The information gathered was used to: provide a baseline for long term monitoring of changes in species distribution; formally assess the conservation status of St. Helena's threatened endemic and native flora; understand the ecological requirements of invasive species to inform control measures; develop ecological management advice for specific habitats; provide accessible literature on St. Helena's unique flora for use by conservation managers and the general public.

During the survey, some 60 alien species were identified as new occurrences to the island. Some of these are threatening St. Helena's native flora and urgent steps are needed to control them before they become a serious problem. The most notable invasive species include, bridal creeper Asparagus asparagoides (Asparagaceae), African fountain grass Pennisetum setaceum (Poaceae) and Mexican creeper Maurandya erubescens (Plantaginaceae). On a more positive note, an endemic species has recently been rediscovered (2008); the neglected tuft sedge Bulbostylis neglecta (Cyperaceae) was last seen in 1806 and presumed extinct. A conservation strategy is currently in the early stages of development for this species.

Original text by Phil Lambdon; edited by Kew's UKOTs team
© Copyright Board of Trustees of the Royal Botanic Gardens, Kew 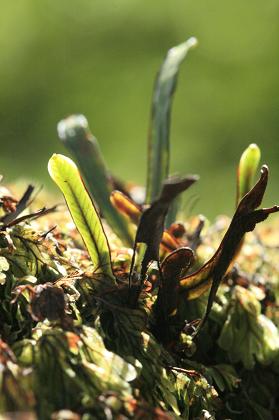 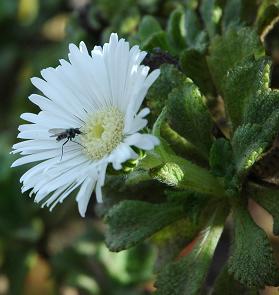 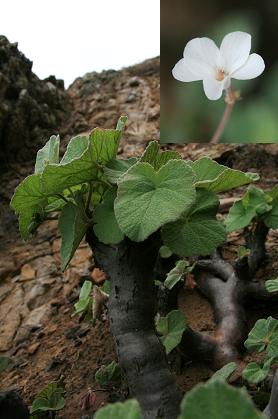 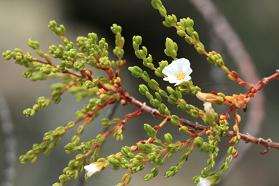 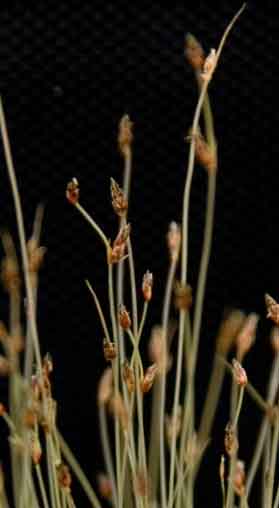 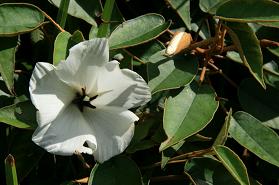